The Personal is Political


The personal is political, according to the second-wave feminist slogan.  It is something that comes up in my mind from time to time as I am constantly navigating between public and private, as a writer and a researcher, choosing when to voice things and when to keep my discomforts to myself.  My masters research is an example of this.  I chose to leave criticism to the voices of others, between the lines, rather than taking it on myself.

The recent controversy over comments made by Summer Burstyn about a kiwi soldier killed in Afghanistan that lead to a 20,000 strong facebook lynch mob/hate group are a pretty obvious example of why moderating one's private thoughts can be a bloody good idea.  Sometimes sensitivity is more important than having an opinion, but this example frightened me because I relate to Burstyn's anti-war sentiments (if not to personally attacking dead people).

Robyn Morgan is explicitly personal in her memoirs.  I would be terrified of doing that myself.  I'm particularly uncomfortable about being public about 'private' things - notably sexuality and spirituality.  I have been wondering recently if my own discomforts are a product of social pathology; the dregs of repressed Victorian culture.  Probably.  Although I fear becoming one of those embarrassingly public people, if I overcome my discomforts I will still have a choice to disclose or not, navigated consciously rather than as an automatic reaction to discomfort.  After all, feminism is all about choice.

Lately I have been journaling binary existences - mapping my research in one notebook beside my bed and my personal writing in another.  Writing is always a process of externalising the internal and to some extent, making public the private, whether it is a fantasy world, deep dark secrets or documenting one's perception of events (bearing in mind that nothing coming from human beings is truly objective). So, in this blog post I am allowing the private and public to converge in an open way, crossing my two, normally separate blogs.

Writing fiction is, in some ways, safer than writing 'fact'.  Revealing personal facts can make us vulnerable to judgement.  We put ourselves on the line - hoping that people care enough to read it and that they don't criticize us too harshly.  Impersonal journalism or academic writing, is a safe way of writing 'fact': Play the game, follow the rules, and no one gets hurt.  It can be challenging in an academic system that's constantly changing; challenging itself, acutely insecure, reacting to criticism in precisely the way that fundamentalist religious groups do not.  My recent experiences of academics is that every time a theory is challenged they instantly agree and abandon it.  Perhaps that is one take on the meaning of my new word: reflexivity. I write and research because I feel compelled to do something important (but don't necessarily know how).  Hence my PhD research topic exploring food sovereignty, and also the allegorical nature of my fiction.  I am often challenged by the thought that it won't attract a great deal of attention unless I really screw up and get caught in the wrong place at the wrong time like Summers.

In this globalised world anything we do can be looked at as either very significant or almost completely insignificant.  That is how I feel about my PhD, I alternate between the two.  I like to think that the interconnectedness of people means that one person's actions have a ripple effect, like some Zen Buddhist proverb, that a bunch of people growing fresh vegetables in a garden can contribute to greater positive change.  After all, we are not in isolation.  The things we do always have some effect.  Growing carrots may just be the most radical thing we can do. 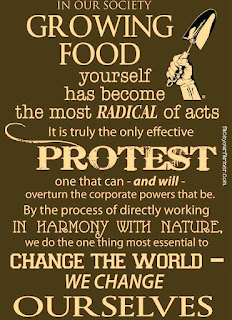 Imagine a world where DNA is open source and owned by the commons and can't be patented and exploited by corporations.

One of my ideas upon embarking on this food sovereignty/democratisation PhD was inspired by the internet and its freedom of information: the democratisation of knowledge, and how this ideology is being reflected in free-food activities like dumpter-diving, community gardening, land-sharing etc.  Knowledge and information can be reproduced and shared so easily, whereas food is limited by its tangibility.  I can't download an apple, but I can find someone on Oooby who has heaps to spare and wants me to cart some away.  I can find a food foraging website that can tell me where the nearby apple trees are, or, for a more long term investment, I could find someone who has heaps of land and wants to land-share and let me plant out some apple tree cuttings from Freecycle or some-such.

I'm really interested in ideas and activities around food and freedom.  The internet and the concept of open-source is inspiring.   This article on 'seed sovereignty' discusses how the Creative Commons concept is being taken up by the food sovereignty movement as a potential way of protecting DNA from corporate patenting.  If the original DNA of a plant is owned by 'the commons' (i.e. everyone), then a company like Monsanto who is only altering commonly owned DNA, as with modifications of open source software, cannot claim ownership over the DNA.  I'm not sure how feasible it is, it if companies like Monsanto can't patent DNA and sue farmers whose crops are unintentionally fertilized by Monsanto owned DNA etc, it would remove much of the profit motivation for GMO.

Along similar lines, this guy interviewed on National Radio is trying to practice open source living for a year, including only eating open source food.  I'm tempted to follow suit.
Posted by Isa at 5:17 PM No comments: Links to this post