What is food sovereignty? 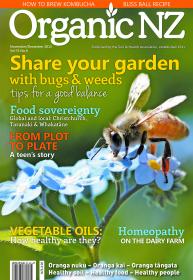 Food sovereignty was a hot topic along with concerns over the recent Food Bill (now Food Act 2014), but what does it actually mean? Over the past four years I have been researching food sovereignty for my PhD thesis. I didn’t know what it meant when I first started. I was interested in the free food activities and food activism that seemed to be springing up more and more. I wanted to look at community gardening, dumpster-diving, permaculture and alternative economies around food. During this time I came across food sovereignty literature and got inspired.

The concept of food sovereignty arose in 1996 from the international peasant movement La Via Campesina, which was formed in 1993 and represents more than 180 groups of small farmers and migrant workers around the world – see viacampesina.org. Via Campesina was disillusioned with the United Nations’ concept of ‘food security’, which is focused on households having access to adequate food. This concept favours food policies that maximise food production and access opportunities, without questioning how, where and by whom food is produced.

The co-option of ‘food security’

The term ‘food security’ has been co-opted by big corporations. Companies like Monsanto were (and still are) putting pressure on the United Nations to support their genetically engineered crops in the name of food security, often at the expense of indigenous people and small-scale farmers.
‘Food security’ offered no real possibilities for transforming the existing system, which is socially and environmentally exploitative. Therefore, Via Campesina called for a new term, one that could not be co-opted by big corporations because its focus is strongly connected with communities having power over their own food system.

According to the International Planning Committee for Food Sovereignty:
“Food sovereignty is the right of peoples to healthy and culturally appropriate food produced through ecologically sound and sustainable methods, and their right to define their own food and agriculture systems.
It puts those who produce, distribute and consume food at the heart of food systems and policies rather than the demands of markets and corporations. It defends the interests and inclusion of the next generation.
It offers a strategy to resist and dismantle the current corporate trade and food regime, and directions for food, farming, pastoral and fisheries systems determined by local producers.
Food sovereignty prioritises local and national economies and markets and empowers peasant and family farmer-driven agriculture, artisanal fishing, pastoralist-led grazing, and food production, distribution and consumption based on environmental, social and economic sustainability.”
– Declaration of Nyéléni, 2007

A radical critique of corporate food

According to a vast and growing body of research, food sovereignty is a potentially radical and powerful critique of the corporate food industry. It also focuses on alternative models for agriculture that are intended to be more environmentally and socially just. The grass-roots origins of food sovereignty, as well as its inclusive nature, are two of its greatest strengths.
With its strong focus on caring for people and the environment, and its obvious similarity with permaculture, agroecology and indigenous values, it has the ability to connect diverse groups of people variety of different backgrounds. Organic farming shares these values: the International Federation of Organic Agriculture (IFOAM, of which Soil & Health/Organic NZ is a member), is based on the four principles of health, ecology, fairness and care.
Food sovereignty has also been used as a platform to influence government policy in several countries including Ecuador, Venezuela, Mali, Bolivia, Nepal, Senegal and some parts of the United States. It is intentionally linked directly to democracy and justice by putting the control of land, water, seeds and natural resources in the hands of the people who produce food. A core purpose of the food sovereignty campaign is to redistribute land and the power over food production to enable marginalised communities to produce their own food.

In my doctoral research, which has been based in Raglan and a few other parts of New Zealand, I have found that a lot of small-scale local food producers already hold shared values that reflect those of the international food sovereignty campaign.
Groups such as Te Waka Kai Ora, the Koanga Institute, various community gardens, permaculturists and members of Soil & Health have been working towards similar goals and resisting similar corporate powers.
We can also learn a lot from how food activists and organisations in other countries have influenced their governments to do more to support sustainable food production. In the face of a global corporate system that works by a process of alienation, the most powerful thing we can do is practice connectedness.

Isa Ritchie is a researcher and writer: www.nourishingrevolution.blogspot.co.nz

The 6 pillars of food sovereignty

1.    Focuses on food for people: The right to healthy and culturally appropriate food is the basic legal demand underpinning food sovereignty. Guaranteeing it requires policies that support diversified food production in each region and country. Food is not simply another commodity to be traded or speculated on for profit.
2.    Values food providers: Many smallholder farmers suffer violence, marginalisation and racism from corporate landowners and governments. People are often pushed off their land by mining concerns or agribusiness. Agricultural workers can face severe exploitation and even bonded labour. Although women produce most of the food in the global south, their role and knowledge are often ignored, and their rights to resources and as workers are violated. Food sovereignty asserts food providers’ right to live and work in dignity.
3.    Localises food systems: Food must be seen primarily as sustenance for the community and only secondarily as something to be traded. Under food sovereignty, local and regional provision takes precedence over supplying distant markets, and export-orientated agriculture is rejected. The ‘free trade’ policies that prevent developing countries from protecting their own agriculture, for example through subsidies and tariffs, are also inimical to food sovereignty.
4.    Puts control locally: Food sovereignty places control over territory, land, grazing, water, seeds, livestock and fish populations on local food providers and respects their rights. They can use and share them in socially and environmentally sustainable ways that conserve diversity. Privatisation of such resources, for example through intellectual property rights regimes or commercial contracts, is explicitly rejected.
5.    Builds knowledge and skills: Technologies, such as genetic engineering, that undermine food providers’ ability to develop and pass on knowledge and skills needed for localised food systems are rejected. Instead, food sovereignty calls for appropriate research systems to support the development of agricultural knowledge and skills.
6.    Works with nature: Food sovereignty requires production and distribution systems that protect natural resources and reduce greenhouse gas emissions, avoiding energy-intensive industrial methods that damage the environment and the health of those that inhabit it.