Food, depression and the disconnect

Are the pies making us depressed, or is it just society? 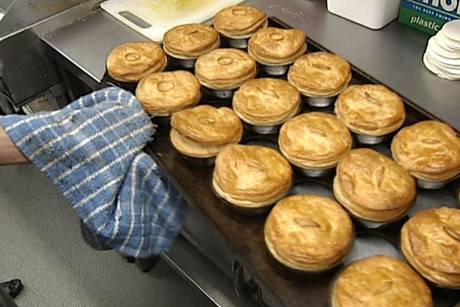 One of the main problems with contemporary nutritional science is its blatant reductionism. The body systems and nutrition are incredibly complicated and science can only really pluck at stray threads or stare endlessly in pixels and then make gross generalisations - although to be fair, the grossness is usually the fault of the media.  I just Jennifer Bowden's recent nutrition column in the recent Listener magazine exploring the link between diet and mental health. Surprisingly good food for thought, considering my general opinion of generic mainstream nutritional information.  She sites a number of studies that show a correlation between conditions like depression and eating fast foods and commercial baked goods.

I can see a personal correlation here. I started craving high calorie processed foods at the onset of puberty.  Around the time I was eating gorging on spaghetti and cheese toasted sandwiches and pies I was also diagnosed with depression.  I'm not sure if being tired and overwhelmed with emotional turmoil makes me more likely to eat pies or the other way around. Bowden sites several longitudinal studies showing that over a period of 5 years the consumers of more Western, processed foods were more likely to go on to develop depression. It's not all that hard to believe.  This is the first time in history our bodies have been swamped with an onslaught of highly processed flour, sugar and vegetable oil.  After tens of thousands of years of various less-processed diets, we have only had fast-food for less than a hundred and while it's easy to swallow, it's notoriously hard to digest.  I wonder if the food-depression connection has anything to do with serotonin, one of the main brain chemicals involved in happiness, being produced in the digestive system.

Bowden's article has a lot of good points: winter correlates with emotional disorders; and it isn't all that hard to believe that more fresh fruits and vegetables, more home-cooked meals and less bakery pies and late night drive-through snack missions are good for overall mental health.  It certainly puts a different spin on comfort eating.  What is really missing here is the connection between processed food and the rest of Western society which is often experienced as alienating and blah.  Likewise, you can gorge on all the Mediterranean style meals you want and still be eating out of the lap of corporate consumerism rather than growing your own food (which I'm sure is good for mental wellbeing) or supporting community innitiatives (also warm and fuzzy).

One final thing that did bother me about Bowden's column is that she mentions winter and less vitamin D correlating with mood difficulties but, at the end of the article her description of a Mediterranean diet includes lean meats and fat free dairy.  Not only is this a very strange perversion of traditional Mediterranean food; ever heard of Greeks trimming all the far off their roast lamb? Ever heard of traditional fat-free Greek yogurt? It also blatantly disregards the vitamin D contained in animal fats.  To be fair, it's not her version of a Greek diet, she is just describing one that is being used in trials to see if it makes a difference in mental health.  I just wish our residual puritan terrified-of-fat contemporary Western nutritional paradigm would get some more perspective.
Posted by Isa at 11:09 PM 4 comments: Links to this post