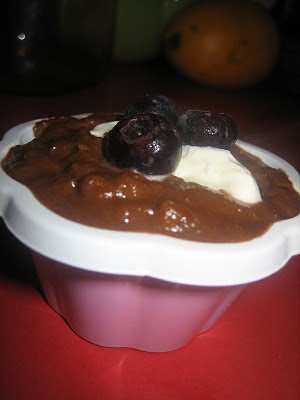 There's nothing better than chocolate pudding on a cold winter night.  I have made similar puddings before, but this one was particularly yummy.  I consider it to quite healthy because of the relatively low sugar levels - because most of the bulk and sweetness come from the kumara (this is another case where we have different names for the same thing, but I'm pretty sure these particular kumara are called yams in the US).  The texture varies depending on how much you mash/puree the kumara, I quite like it with a bit of variation rather than completely pureed.  The kumara needs to be pre-cooked.  I often put them in the oven when I'm using it for other things so I have them ready to be mashed - remember to poke a few holes in it before you bake it.

One large orange pre-baked kumara (yam)  - you could also use other varieties but these ones have a nice texture.
50 grams butter or coconut oil
2 free-range eggs
Half a cup of cream or coconut cream
1/4 cup of brown sugar, honey or preferred sweetener
30 - 50 grams very dark chocolate, I used Schoc 100%
2 Tbsp cocoa powder
1/2 cup hot water

1. Melt the butter in a medium sized pot, when it has melted remove from heat and add in the chocolate in pieces
2. Mash/puree the kumara and add to the pot along with the eggs, sugar and cocoa.  Mix thoroughly.
3. Add the hot water and heat gently until the mixture is heated to your satisfaction.

My two year old loves this - she ate her whole cup full and then asked "More chocolate?" 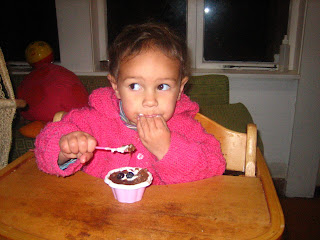 She is now on her third little cup "Yum!"

I also had the idea that I might use up some of the extra pudding by freezing it in ice block moulds.


The Chocolate Non-Controversy
One thing I have come across in my research of the Weston A. Price Foundation is that Nourishing traditions is very anti-caffeine despite having a recipe for kombucha which used caffeinated tea.  Many of the nourishing blogs I have come across include chocolate (and sometimes coffee) containing recipes - something that I am in immense support of being a huge chocolate fan.  Although this could be seen as a contradiction I prefer to see it as an example of the dynamic nature of a grass-roots movement - whereas in a hierarchical top-down movement the chocolate rebels would have been thrown out long ago.  I'm not sure if there has been any discussion about this within the movement.

This was posted as part of The Nourishing Gourmet's Pennywise Platter
Posted by Isa at 11:44 PM