Sourdough crumpets, feijoa vinegar and pondering on the middle class? 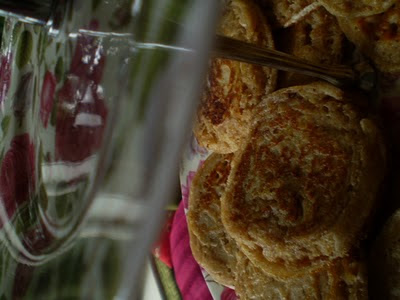 In this post-industrialised society dominated by service sector jobs, bizarre corporate structures and so many occupations that didn't exist a decade ago, immersed in the information overload of the internet and other media... (yeah, you can probably tell my brain is still frazzled!)... So at the Women's Studies Association conference, on Sunday, when a woman asked me (well, actually commented, rather than asking a question, and I can't really remember what else she said) about 'middle class' - saying she didn't really like the term, I had to think (a dangerous thing for my brain at the moment)... So I've questioned this class thing before, we're no longer in a Marxist bourgeois/proletariat system - we've had the post WWII rise of the middle class and consumerism and many, many household appliances to go along with it.  We still have huge issues with poverty - globally and locally and there are a small group of people with most of the world's wealth (so we've been told over and over again)... there are still a large number of people in 'developed' nations who have a little luxury, but not a lot.  So despite the complex and varied social stratification, I'm going to keep using this term - to paraphrase Johanna's comment a while back: you do have to be middle class to have the luxury to lead the lives that we're blogging about.

The conference presentation went really well - I got positive feedback - and I'm greatly indebted to my food bloggers (as I've started calling you), particularly Johanna and Sandra, who's quotes I used a lot in the presentation.  I wish there was a way to attach the power point.  It was basically a facilitated blog discussion of middle class women's role in the Nourishing Food Movement (entitled: Back to the kitchen).  I'm very grateful to everyone who contributed to the discussion(s) on the blog(s) which will also be in my thesis.  It was interesting that the process of submitting my abstract, receiving critical feedback and blogging about it generated so much discussion that my research and the conference paper were steered in that direction! 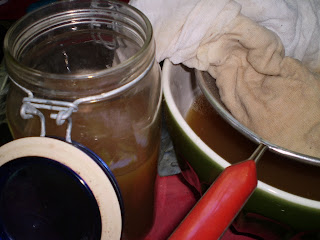 A while back I was making those tasty tasty feijoa drinks and I mentioned attempting vinegar.  At the moment (after leaving feijoas and water in a bucket for months and months and then draining the liquid off) it looks like this: 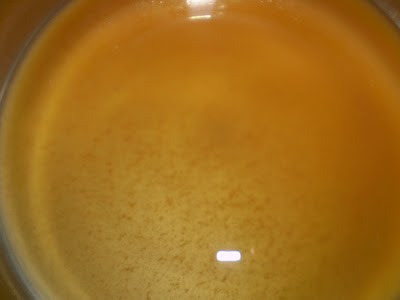 It tastes quite nice - for a vinegar, a little like apple cider.  I'm going to let it sit until the sediment separates again and then put it in little bottles for xmas presents - I also want to make drunken cherries, chocolate truffles and lip balms - provided I can get this thesis out of the way by then!

Recently, we had a tea party and I made sourdough crumpets - using this recipe from Zucchini and Chocolate.  They came our beautifully (I used the rings from agee jars as crumpet rings) and were absolutely delicious, spread with mascarpone and berry conserve.

I was amazed that crumpets - those things that come in a plastic packet from the supermarket - with the interesting texture - can be made so easily at home - and with sourdough!!! I'm in love with this recipe and I may even be bothered to make it again soon. 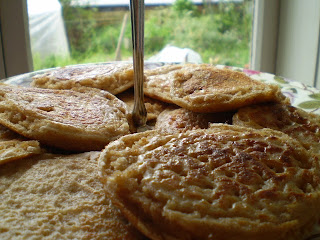