So.  I was going to do a PhD.  Then I wasn't.  Now I am.  It's a long and complicated story which I won't go in to, but as a result of this journey I had to completely detach from the idea of doing a PhD... and from any motivations that I might have had based on ego.  If you grow up in a family like mine - with three previous generations of PhDs, with a mother, grand-parents and great grand parents who are/were academics, it gets kind of entrenched.  It's like this is what you're supposed to do to be a satisfactory individual, and if you don't, well... maybe you just should.  Here's a picture of the lotus temple at the last KiwiBurn. 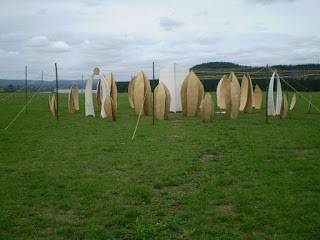 Anyway.  So it would sound pretty cool to say "I have a PhD", but it's not really a good reason to spend three/four years of my life pouring my energy into research through an institution which I don't really believe in, which is probably out-dated, now that the internet exists.  I don't believe in gate-keeping knowledge, I believe it should be free.  I don't want to be an academic or spend my life institutionalised (although it has been most of the time so far).  Here's a blurry photo of the temple burning: 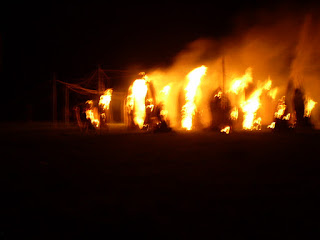 The only reason I'm wanting to do this research now is because I love my topic and I found out the other day that my scholarship has been extended, and I now have two awesome supervisors, so all I need to do is get enrolled.
Posted by Isa at 1:44 AM