A matter of fat

This is an essay I wrote about fat (well, the lipid hypothesis, etc.) for an honours directed study.  I'm changing it slightly, but using a lot of the same material in my thesis.

The Lipid Hypothesis: Science, Politics and Profit.
It is common knowledge that eating saturated fat causes heart disease and that high cholesterol levels are unhealthy.  These things are considered to be scientifically proven, yet there are many historical and cultural exceptions that continue to defy this knowledge.  The Masai tribe in who consume only blood, milk and meat have a diet high in saturated fat and yet have no evidence of coronary heart diesase, as do the French on their notoriously fatty diet.  Despite these exceptions mainstream medical and scientific opinion has been convinced that saturated fat is unhealthy.  This essay will explore the history and science behind the lipid hypothesis as well as the social issues influenced by it.  Firstly, by explaining the lipid hypothesis, the diet-heart idea, and cholesterol.  Secondly, by looking at the history of the scientific and political 'cholesterol wars'.  Thirdly, by exploring the social evolution of this widely held theory and the industries and agendas that surround it and, finally, this essay will critically examine the scientific approach that has been taken in order to establish this theory.
The Lipid Hypothesis:
The lipid hypothesis is the idea that high levels of cholesterol in the blood leads to coronary heart disease.  The diet-heart hypothesis, considered a partner to the lipid hypothesis, claims that saturated fat in the diet causes raised blood cholesterol and therefore, leads to coronary heart disease (Ravnskov, 2000).  Many scientific studies have been designed and run in order to prove this hypothesis, and despite its current popularity there still exists a group of outspoken critics who claim the evidence fails short of proving anything[1]. As Gurr (1991 B) states “Critical examinations of the literature reveals that the 'Lipid Hypothesis' is not as simple or as well-founded as it apears” (p.1)
What is Cholesterol?
Cholesterol  is a fatty substance found in every human cell.  It is used by the body to repair damaged cells and involved in many necessary bodily functions (Gurr, 1991).  According to the Merck Manual of Medical Information[2]
Cholesterol and triglycirides are very important fats (lipids) in the blood.    Cholesterol is an essential component of cell membranes, brain and nerve          cells, and bile which helps the body absorb fats and fat-soluble vitamins.  The body uses cholesterol to make vitamin D and various hormones such as       estrogen, testosterone, and cortisol. (Beers, 2003, p. 836)
Despite its many essential, health promoting properties, cholesterol has a bad reputation.  Because of the lipid hypothesis and its publicity, cholesterol has negative connotations associated with heart disease.  The very low levels of cholesterol recommended by the dominant medical system and the cholesterol lowering drugs that achieve these low levels may be depriving the body of the valuable substance necessary for self-repair.  This may be the reason why elderly people are much more likely to die from all causes if they have low levels of cholesterol (Ravnskov, 2000).  Conversely, high colesterol levels measured in the body might be a sign that the body is trying to repair damage, rather than the forwarding of altherosclerosis.
Good and bad cholesterol
Recently the idea has been circulated that some cholesterol, LDL, is bad while HDL cholesterol is good (Ravnskov, 2000).  Neither LDL or HDL are actually cholesterol, both are proteins (lipoproteins) that transport fats around the blood stream (Ravnskov, 2000).  LDL cholesterol transports fat into the blood stream, it is called low density lipoprotein because it has less protein density and more fat.  HDL transports fat back from the blood stream and as some of the fat has been stored in cells it has a higher ratio of protein to fat (Merck, 2003).  Because LDL transports protein into the blood stream it is considered to be bad, the returning HDL is considered to be good (Ravnskov, 2000).  This might seem an unscientific distiction[3] but it is helpful in marketting a drug which is known to lower the 'bad' cholesterol.  The industries involved will be explored later in this essay.
The Cholesterol Wars:
Before the lipid hypothesis eventuated, a young scientist mamed Ignatowski  began working towards proving the hypothesis by Metschnikow that an excess of dietary protein was toxic and accelerated the aging process (Steinberg, 2004). Ignatowski fed rabbits a protein-rich diet  (large amounts of meat, eggs, and milk)  which had the affect of causing arterial lesions like those of human atherosclerosis. Later, Anitschkow and Chalotow found that a diet high in fat without the protein also caused these lesions.  Steinberg (2004) refers to this as “Another instance of an unpleasant fact destroying a beautiful hypothesis” (p.11). However, from these experiments the lipid hypothesis emerged.  Critics of Anitschkow argued that the digestive systems of rabbits were not designed for a diet high in animal fat and demonstrated the limits of this research by running similar trials on dogs and rats which resulted in no arterial lesions.  Dogs and rats produce bile which breaks down fats during digestion, as do humans (Masterjohn, 2008).  This was seen as sufficient evidence, at the time, to disprove the theory, however, devotees remained (Steinberg, 2004).
Ancel Keys is known as the founder of the lipid hypothesis.  He used data collected from six countries to show an obvious correlation between the consumption of fat and the rates of death from coronary heart disease (Ravnskov,2000).  Keys has been criticized for excluding data[4] from countries that did not support his theory (Ravnskov,2000).  A graph constructed with all the available data would show no obvious correlation. 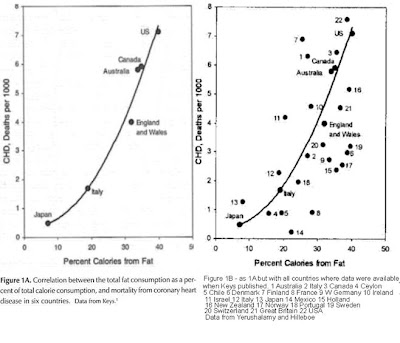