Why am I here?

What would possess me to focus on this topic for my thesis?  I have been interested in health for a long time - it seems to be a difficult balancing act for me to maintain functioning levels of health -  and because of this I naturally became interested in nutrition.  I first came across Nourishing Traditions, the Weston A. Price Foundation cook book/nutritional bible while I was studying nutrition as part of a herbal medicine diploma, but it wasn’t until a few years later, when my baby daughter had difficulty breastfeeding, that I acquired the book and became aware of the Weston A. Price Foundation.

I was disgusted by commercial infant formula – it somehow managed to have both the qualities of being sterile and putrid simultaneously, neither of which appealed to me.  I googled something along the lines of “baby formula recipe”, wondering if such a thing existed and immediately found the raw milk formula recipe from Nourishing Traditions.  It looked quite complicated, calling for ingredients such as; homemade liquid whey, lactose, bifidobacterium infantis, high vitamin cod liver oil, unrefined sunflower oil and so on, which was a bit off-putting. 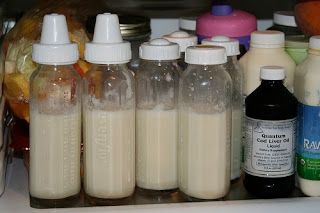 I contacted a friend who had similar food interests and was forwarded to a woman in who referred me to a local woman, Rebecca who was regularly purchasing raw organic milk from a farm.  Meanwhile I had bought Nourishing Traditions and pondered over the formula recipe.  I contacted the farmer and drove out to pick up my first taste of organic raw milk.  The farmer was particularly well informed.  He told me that the milk was safe and mentioned experiments where pathogens had been put into raw milk and the enzymes naturally in the milk had fought off the foreign bacteria.  The raw formula I made smelled much better than conventional powdered formula, despite the fish oil.  My daughter drank it down and was a particularly healthy baby.  I must admit I did simplify the formula, particularly after she started eating solids.  Through Rebecca, I joined a milk group, taking turns to drive the forty minutes to the farm to collect everyone’s milk. I quite enjoyed the milk and began culturing it, making yogurt, kefir and experimenting with cheese.
During this time I became quite well acquainted with Nourishing Traditions, particularly the controversial advocation of natural saturated fats and raw animal products.   It occurred to me that the conventional nutritional information I had seen was confusing and often appeared to be skewed in favour of the food/diet food industries which I found to be particularly unsettling. These factors, combined with my passion for food, motivated me to focus on this topic for my Master’s thesis.
Posted by Isa at 9:37 PM